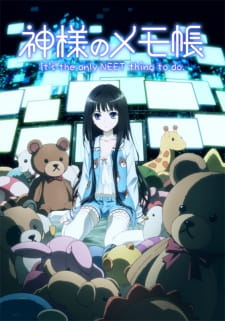 Plot Summary: Narumi Fujishima may seem like a normal high school student at first glance, but in reality he is a pessimistic outsider. Due to his father's work, he had to constantly transfer schools, and thus he has never managed to become a part of society. When he is forced to join the gardening club by his cheerful classmate Ayaka Shinozaki, Narumi encounters the genius hacker Alice, who lives in isolation above Hanamaru, the ramen shop where Ayaka works part-time. He then discovers that Alice is running a special private detective agency, and that all her professional associates refer to themselves as "NEET"s: Not in Education, Employment, or Training. Joining the NEET detective agency due to his personal connection with a criminal case, Narumi finds himself entangled in a world of dangerous investigations conducted by the ill-assorted group of detectives, all the while trying to track down the crime syndicate which seems to have mysterious ties to Alice..